While exploring back roads in West Virginia, I discovered this old iron furnace. It is located in Shannondale, West Virginia. 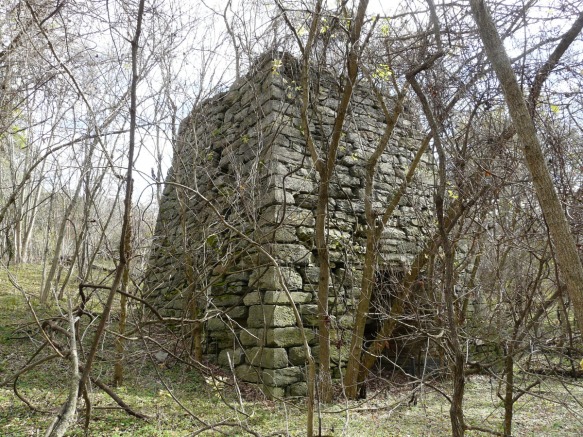 I showed some of the photos to friends and most of them had no idea what it was. After I explained what it was used for, it seemed a good subject for an educational kit. Similar stone stacks are scattered all over the eastern United States and in many other parts of the world,

When it was in peak operation, just prior to the Civil War, it was producing three ton of cast iron per day. Since the model is to be used as a teaching aid, it is simplified to show operation.
The waterwheel shaft has a crank on each side that drives pistons in the tubular bellows assemblies mounted above. The bellows force a continuous blast of air into the base of the furnace.

The stone textures on the sides of the model are taken directly from profile photos of the Shannondale Iron Furnace.

After a bit of research, I started working on a cardstock model. Here’s the very first test piece.

This is missing a bunch of parts, but I was anxious to get an idea of how it would fit. 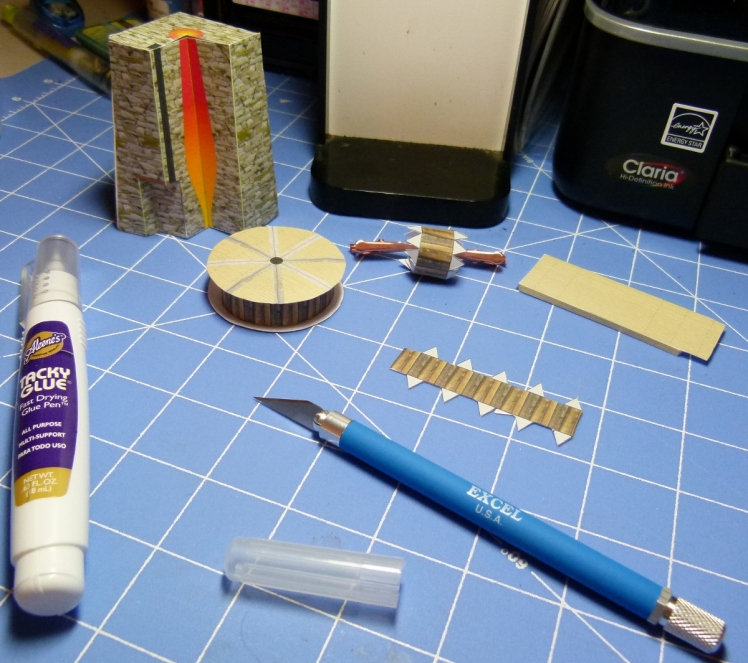 I added some glue tabs inside the top area. But, I’m satisfied with the overall fit and texture. This is in approximate HO scale, by the way. That means the base is about two inches square.

After three days of part-time fiddling, I have some pictures of the second generation build. It’s still a bit rough in places, but I think I’m on the right path.

The final kit is two 8.5″x11″ sheets plus the instructions.This is sheet one:

Here’s a picture of the third-generation build:

After a couple of week’s of part-time work, I finally finished the instructions and made one more, final test-build.

The iron furnace kit can be made with a cutaway, as shown, for educational purposes. It can also be made in a closed version if you wished to use it in the background of an HO scale diorama or model train layout.

Download each of the following three PDF files to build your own Iron Furnace.

If you’re just getting started with cardstock models, I suggest these tools.