“Steamed: A Steampunk Romance” by Katie MacAlister
Printed by Signet, a division of Penguin Publishing
Okay! I’m a man. I admit it. When I first laid eyes on the cover art for Steamed I was hooked. It has to be one of the best covers I’ve seen in years. 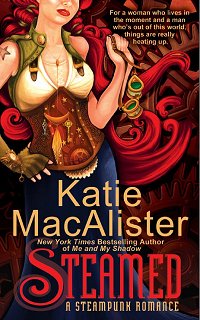 Let me digress… Awhile back, someone noted that covers for almost all the big-name urban fantasy and paranormal romances have a back or three-quarter view of a shapely young woman with a dark background the hints of great danger. Occasionally, a lusty male figure will be in the background. In very few of these cases, do you see the woman’s face. This is done on purpose, so that the reader can imagine themselves or their loved one in the heroine’s shoes, boots or calluses.
The cover art for Steamed takes a slightly different twist in that it is not a photo or photo-realistic painting, but rather a garish comic drawing in shades of reds, browns, gold and flesh-tones. It fairly jumps off the rack at you.
Enough about the cover. That’s why I picked it up in the first place. But what about the story, itself?
This is the first time I’ve read any of Katie MacAlister’s works and I’m going to remedy that oversight with the next few visits to my local bookseller. Steamed was a fun read! The promise of the cover, the premise hinted at in the synopsis and the tagline are fulfilled perfectly. This really is a wonderful tale of steampunk romance.
The hero is a member of the Society of Friends, also known as Quakers. This is a religious group that actively practices non-violence. As our hero demonstrates, that doesn’t mean they are pushovers or won’t defend themselves or those they love.
The action is a roller-coaster of melodramatic scenes that play in your head like Indiana Jones movie trailer. Airship warfare is offset by highly-charged romantic trysts that are never X-rated and yet leave little to the imagination.
The heroine is the captain of an airship full of incredible characters and is perfectly depicted on the cover. That should say enough.
If you need a fun read to offset some of the dystopian steampunk and urban fantasy novels that fill the shelves, you won’t go wrong with Steamed. I give it five pasties!

Bravo, Katie! I’m a fan and eagerly awaiting a sequel.