My current desktop computer system is about seven years old. In the past couple of years, I’ve swapped hard drives and replaced a failing power supply.

A couple of month’s ago, I decided to build a new one and started researching. My desktop is used for writing, web-surfing, video streaming, graphics, and occasionally some audio-video editing.

I finally managed to get the package price down to $447 total with free Amazon Prime shipping!

It isn’t the fastest super-gaming system, but should do what I want and be a viable replacement for the current tired system.

Part of the order arrived from Amazon this past weekend.

The latest word from Amazon is that I’ll probably have to wait at least another week or two because of a back order on the RAM.

Kubuntu 20.04LTS (Focal Fossa) has just been released and I’m going to install it on my laptop so I can become more familiar while waiting on the RAM and power supply.

Over the course of about two and a half hours, I unpacked and assembled the basic system. Here are some photographs and comments.

When I unpacked the Thermaltake case, this is what it looks like.

Just a tip: Auto supply stores, Harbor Freight, and other hardware stores sell small stainless dishes with heavy-duty magnets on the back. These are great for keeping track of all the various screws and other small parts.

Be sure to save all the extra parts they packed with the drive. You may not need them now, but sooner or later, you’ll appreciate them.

The front panel just pops off and that provides access for the two hard disk drive bays. It is worth noting that none of the cases I looked at had space for a DVD/CD drive. 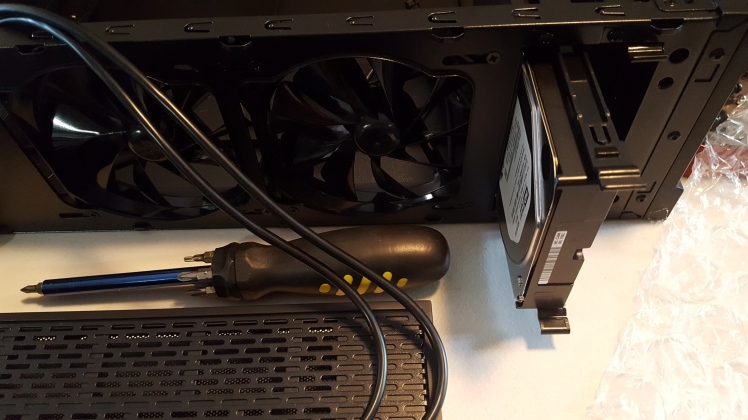 When I opened the motherboard box, this is what I found:

Another tip: Always cheat and read the damn directions!

This is what the final build looks like after connecting all the wires and closing the case. It will have to sit alongside my current system until the power supply and RAM arrive.