One of the better creative blogs that I follow is by sethsnap. Yesterday, he posted the following…

Your story- Deserted – by sethsnap

“I took the following photo on a country road near my house. It was late at night. I’m not sure how I feel about the photo. Tell me what I should feel.”
“Your Story is a SethSnap series in which you get to decide the story behind the photos. You can write a story, a poem or even just one word. You decide.” – sethsnap

Here then, is my response to his photograph.

I don’t know why my car stopped.
The gas gauge showed more than half. There were no ominous sounds or smoke. The engine died and I coasted to a stop.
This was all I needed after another hellacious day at the office. With a quarter of the staff out sick with the flu, one manager on vacation, and the owner’s semi-literate son throwing temper tantrums, I was at wit’s end.
After more than thirteen hours of playing referee during the office politics games, OwnersSon decided I was the perfect choice to go out of my way to deliver a package.
This left me on a deserted blacktop in the middle of nowhere when I should have been in bed.
I sat and waited a few seconds, then tried to start the car again. The lights dimmed and I became worried about the battery. I pulled my phone to call a wrecker. No bars!
The flashlight was where it belonged, so I took it, popped the hood latch, and stepped out.
I pressed the button and nothing happened. The flashlight batteries were dead.
Fatigue had me shaking, despite the warm summer evening, and I leaned against the fender, eyes closed, head bowed, arms folded.
“Relax.”
My eyes opened and my head snapped up. “Hello? Who’s there?”
The half-grown field whispered at me as a ghost of a breeze slid by. Cautiously, I turned, looked around, and saw no one. I raised my voice a little. “This isn’t funny. Show yourself.”
“Oh my! Aren’t we nervous tonight.”
I spun back and standing next to my car, was a young woman. She wore a simple sun dress with a floral pattern, was barefoot, and smiled softly.
“Sorry. I didn’t see you come up. My car died and I need a lift.”
“What you need is to stop and look around. It’s a beautiful night and you are way too tired to be racing down this stretch of road without taking a moment to enjoy the gifts you’ve been given.”
“What gifts? For Pete’s sake, woman. My car is dead, no flashlight, I just finished a double-shift…”
“Shssss!” A slender finger to her lips. “Just stop and look around.” She gestured at the field beside us and leaned against the fender.
I shook my head, folded my arms, and followed suit.
“This road has been here for ages. It started as a trail between giant trees, worn down by generations of hunters. Later on, great beasts hauling wagons, widened it. Now, it has been hardened to smooth the way for machines as well as the children of men.” She paused and looked wistful. “One thing has held true over the ages. When someone is troubled, here, they are granted peace, if only for a little while.”
As she spoke, my gaze followed the distant tree line. First, I noticed the faint glow of city lights, then a sparkling of farm yard lights as branches moved with the wind. I closed my eyes for just a moment, then opened them to enjoy the way the breeze flowed like waves over the field. As my eyes grew accustomed to the moonlight, what I first perceived as stark and foreboding was revealed as warm, golden tones, accented by shadows. Without thinking, my arms dropped and I placed my hands on the warm fender. I leaned farther back and took a deep breath. Then another. And slowly, I felt the tension drain from me. A single tree, standing proudly in the middle of the field, became a focus. The dark form became clear and distinct, with shades of green and brown, fading to black shadows. It was welcoming.
“Yes. You’ll do.” She interrupted the whispering night sounds.
I nodded and smiled, then stopped and shook myself. “Do for what?”
She was gone.
I shook myself again, blinking rapidly, and realized it was much lighter. The first glimmer of false-dawn lightened the eastern sky. How could I have been here all night?
I sat back down in the car to collect my thoughts. Mostly on reflex, I turned the key and the motor started. I let it idle for a second and checked my phone. It showed four bars. That was plenty of signal. It didn’t really matter.
There were no other cars around as I put the car in gear, I realized I felt better than I had in ages. Somehow, a bit of fresh air and an unplanned nap, had refreshed me more than I had thought possible.

A Challenge of My Own

I’m not sure how I feel about the following photo that I shot awhile back. Tell me what I should feel.
Let your creative side tell the tale behind the photo. You can write a story, a poem or even just one word. You decide. 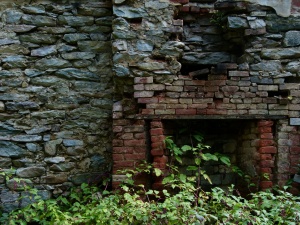